Piha is New Zealand’s most famous surf beach. Situated on the west coast of the North Island, 40 kms from the city of Auckland, this black iron-sand beach has a reputation for awesome surf which rolls in over the Tasman Sea. When Uncle Toby’s Iron Man contest was held at Piha in 1997, canoes were snapped in two and they’ve never come back. 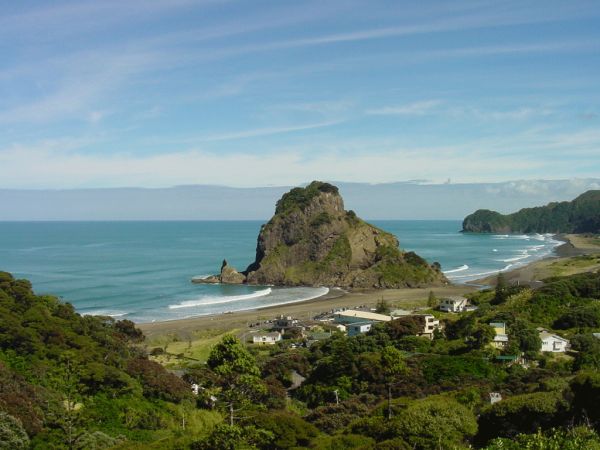 The west coast of Auckland is reknown for its wild, rugged surf beaches. Piha is on about the same latitude as Albury/Wadonga, so the water is not particularly warm, but the surf is usually world class. Unlike most Australian beaches, the main surf break is several hundred metres off shore in about 20m of water. There is an in-shore break as well, and this is good for the novice or body surfers.

Accompanying the surf are notorious rips. It is imperative that you swim between the flags and obey the instructions of the life guards. Piha regularly racks up the most number of rescues on any beach in NZ simply because swimmers underestimate the rips and do not know how to get out of them.

When it was rebuilt back in the mid 1990's, the surf club was modelled on an Australia club and offers a large bar, good bistro food as well as international quality facilities for surf rescue.

The beach itself is split in two by a large rock called Lion Rock. With a height of over 100m, you used to be able to climb to the top, but was closed many years ago when the path eroded to a dangerous level. The larger portion of the beach to the North, not surprisingly know as North Piha, is patrolled by the United Surf Club and is less popular than the southern beach.

To the south is a large rock formation called Camel Rock, and between that and the mainland is an area known as the Gap. At low tide you can walk through the channel to the Gap, visiting the Keyhole on the way. When the tide surges, the waves coming through the Gap can create a spectacular splash. You can also swim in the pool at the Gap at low tide, and the tidal surge can make for an exciting swim.

A short drive back from the beach will take you to Glen Esk Rd. Parking at the end of there and taking a 30 minute bush walk brings you to the Kitekite Falls. These have a beautiful fresh water rock pool where you can swim. As with the beach, given its latitude, the water is decidely fresh!

Piha's iconic black sand is a result of a high iron content. On a hot day, the sand is literally burning hot, so the wearing of Jandals (you're in NZ, so get used to that word - thongs are worn on your butt, not your feet) is pretty much mandatory.

If you want to check out a good surf beach that is not burdened by commercialism and buildings, then Piha or one of the other lesser quality west coast beaches can't be beaten.

As with everything, there is a website that can give you more information, or leave a comment below and I will be happy to tell you more about one of my favourite places in NZ, and my former Christmas hideaway .

Where is Piha Beach?

Mark is the former President of the Sydney Masters Hockey Association and is a current NSW manager in the Over 40's age group. When he is not working in the hockey community, Mark runs an IT Consultancy offering IT Management and business process change services.